In This Issue:
When Will the End of the World Come?
Pre-written History
Prophecies about Christ
What Is Prophecy?
Interpretation of Prophecy

The FREE printable versions (bulletin insert, large print, and e-mail versions) of this Bible View and many others can be found at https://openthoumineeyes.com/newsletters.html.

Are you reading the Bible every day?  If not, have the FREE Daily View Devotion e-mailed to you.  Learn something taught in a KJV chapter from a short commentary, read the chapter, and more spiritual “meat” for the hungry soul.  Sign-up at https://lp.constantcontactpages.com/su/a26cc9Mto start receiving it.

When Will the End of the World Come?
Bill Brinkworth

Since the time of Jesus’ disciples (Mat. 24:3), many have wondered, “When is the end of the world coming?” Many have given dates for the end or dates for biblically predicted end-time events such as the rapture, last judgment, the Battle of Armageddon, and even the future of humanity.  All foretold dates have been wrong!

There are also many predicted dates for the future. Jean Dixon (a psychic) also claims something will happen between 2020 and 2037.  Nostradamus again predicted another date of 3797.

When the projected dates were given, I imagine some were concerned.  Many may have been alarmed and tried to prepare for what they thought would be a cataclysmic event by stockpiling and hoarding supplies, as some are doing today.

Although all the past predicted dates were wrong, some overlook the only source that has never been wrong about predicting events.  This source has foretold many historic past events, and most of its prophecies have come true.  Some predicted events were warned about 1,000 years before the event occurred, but they were still valid prophecies.

This authority told about the coming of God’s Son and what He would do on Earth.  All those prophecies about Jesus came true.  This source also gives many predictions about future events.  This reliable source is God’s Word, the Bible.  If it was correct about hundreds of past prophecies, we can also trust its accuracy about future events that have not occurred yet.

However, the King James Bible, as accurate as it has been in the past, does not give dates for end-time events.  God’s Word has indicated that it is not for man to know when He will begin the last-days events.  He even states that the angels do not know the day and hour, nor does His only Son, Jesus.
“But of that day and hour knoweth no man, no, not the angels of heaven, but my Father only.” Matthew 24:36

If the heavenly host and Jesus do not know when such events will occur, we can be assured that a common, sinful man will not know either.  Certainly, those who believe contrary to what the Bible commands will not be told the details of God’s plan, including psychics, unbiblical religions, astrologists, and even preachers.  Why anyone would think that a Holy God would whisper end dates to human-sacrificing, false god worshipping Mayans is even more ludicrous.

Many sense that the “end” is getting closer.  Cataclysmic events may occur.  This year may be a challenging year financially and physically for many.  We, as a people, have been snubbing our noses at God for a long time.  Why would He not begin to exercise His promised events soon?

However, the last day’s events will begin when God says it is time, and they will be according to the way His Word records them.  God’s Word says the rapture of God’s people will happen first, followed by the seven-year tribulation, 1,000-year reign of Christ, and other judgments on the Earth’s inhabitants.  After they have occurred, this world will be “passed away” (Revelation 21:1), and a new Earth will replace the old.

If people would read and believe their Bible more than what the television or some newspaper writer says, they would realize that most predictions are not even close to what will happen.  Read and believe God’s Word first.  Do not even consider those that set days on God’s plans.

“No leaps of faith are needed to jump from God’s Word into tomorrow.” — Author Unknown

In all ages, God has pre-announced certain things He proposed to do.  These announcements are termed prophecies.  Prophecy is history pre-written.  It is as credible as any Word that God has spoken.

The Bible is filled with prophecies.  Almost all the 66 books contain some prophecy.  Nearly one-fourth of the Bible was predictive when it was written.

It is most reasonable to conclude, since every Bible prediction concerning the past has been fulfilled in the minutest detail, we may expect all the remaining prophecies to be just as literally fulfilled.

“If psychics can know the future, why don’t they win the lottery every time?”

What Is Prophecy?
Dr. J. Hamilton

Fulfilled and unfulfilled, the prophecies are mountains and valleys; mountains, from whose gilded summits you may look on future vistas through the fog.  They are strands of sunshine in the vapor flood where glorious things are revealed, while from the echoing sides of ravings still dark and misty come up the heavy footfall or terrific cries of sorrows not occurred as yet.

“Knowing this first, that no prophecy of the scripture is of any private interpretation.” II Peter 1:20

The apostle’s negative maxim, “… that no prophecy … is of any private interpretation,” has within it two affirmative rules of exposition; that every single text of prophecy is to be considered as a part of an entire system and to be interpreted in that sense which may best connect it with the whole, and that the sense of prophecy, in general, is to be sought in the events which have taken place.

“I never think of the future.  It comes soon enough.”  — Albert Einstein 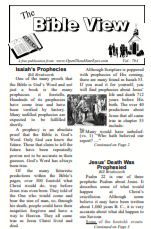 Articles in this Bible View: “Isaiah’s Prophecies,” “It Was Foretold,” “Jesus’ Death Was Prophesied”
Theme: Prophecies about Jesus