In This Issue:
Why Is Society A Mess?
Sliding Down Sin’s Slippery Slope of Ruin

Printable versions of The BIBLE VIEWs can be found at https://openthoumineeyes.com/newsletters.html. FREE versions include ones designed for church bulletin inserts/ handouts and a large print version!

Sign-up  at https://lp.constantcontactpages.com/su/a26cc9M to receive the DAILY VIEW devotion, which includes a KJV chapter for the day and more spiritual food for the hungry soul.

Why Is Society A Mess?
Bill Brinkworth

For centuries, America has had the liberty to have free speech. People could, without fear, voice their opinions. Churches unashamedly preached what the Bible said. Most clearly knew what was right and wrong, as it was taught and practiced in homes, schools, government, and churches.

Although free speech was a taken-for-granted freedom, some areas of wrongdoing were taboo. Those actions were not even mentioned because the majority knew right from wrong.

Slowly, a change happened. Since radical, immoral opinions and behaviors were not usually accepted, outcry, when they did occur, was minimal.

Since there was little resistance to once unaccepted thoughts and behavior, more realized they could break moral barriers and get away with voicing and living the way their lusts and likes lead them. As more vocalized once unaccepted practices, more heard and contemplated the once forbidden sins. Soon, radical behaviors, beliefs, and opinions spread throughout the country.

Boldness to commit once ridiculed and unthought-of practices spread from one to another. In time, degraded morals spread through the land like a plague. No longer was homosexuality, drug use, deserting families by divorce, lying, politically controlling school children’s upbringing, abortion, breaking laws, and doing whatever felt good even questioned. In many places, laws were ignored to further allow what was once shunned to continue. Sin rampaged throughout the nation.

Since the nation’s morality change was gradual, an entire generation became accustomed to the new “morality.”  When that group became parents, they were not troubled when their children also accepted and even practiced the new standards.

Many were busy with their lives and earning an income to obtain what they wanted. Those who did remember what used to be right and wrong made little outcry about the changes in society.

Confusion about what was “right” and “wrong” became cloudier. People with lifestyles that would not have been acceptable decades previously became leaders, teachers, preachers, and socially recognized “heroes” of the changing society.

Over decades, those with millennia-held biblical standards were now the social outcasts. A growing majority now looks down upon those that will not tolerate or accept sin. What once was recognized as iniquity has become acceptable, and “good” is now seen by many as “bad.”

Names were created to negatively label those that would not accept the new “morality.”  Those adhering to biblical morals were now branded as “hateful,” anti-politically correct, anti-environmental, ignorant (because they did not think like the masses), social terrorists, and many more demeaning titles.

Freedom of speech is slowly removed from society. Some that hinted at holding onto past social beliefs are now having their employment threatened, dismissed from schools, not allowed in certain sports, and castigated from even vocalizing their opinion.

Pressures to make more conform to the new morality is even spreading throughout the world. The growing insistence on rejecting the old morality is not unlike the Nazi movement before World War II.

Unstopped, this growing out-of-control movement will further divide and destroy freedoms all take for granted. Changing centuries of beliefs and practices will probably not be diverted by any political or public outcry.

Those that discarded and disobeyed God’s Words have suffered a significant loss while on this Earth and will face devastation in eternity. No nation or people has ever prospered when the commandments of God were not obeyed.
“And he said unto them, Ye are they which justify yourselves before men; but God knoweth your hearts: for that which is highly esteemed among men is abomination in the sight of God.” Luke 16:15
“Woe unto them that call evil good, and good evil; that put darkness for light, and light for darkness; that put bitter for sweet, and sweet for bitter!” Isaiah 5:20

It has been the guideline for previous millennia. Guidance from it has improved lives, even those that many thought had no hope. Families have been reunited after adhering to its laws. Those with no hope have gained insight and flourished. Nations abiding by His commandments have prospered and been blessed. Obedience to God’s commandments is the only solution for improving the current “mess” in society.

In your lifetime, have you seen how our society is degraded? Common sense is no longer common. Right is wrong, and wrong is right. Good is now evil, and evil is now acceptable. Most likely, there will not be a great revival changing the minds and actions of multitudes, but you can change.

Dive into the Bible. Find what God defines as right or wrong. Follow His way no matter if it is unpopular or the price you may have to pay to do what God says is “right.”  Living God’s way is the only hope we and our society have!
“And if it seem evil unto you to serve the LORD, choose you this day whom ye will serve; whether the gods which your fathers served that were on the other side of the flood, or the gods of the Amorites, in whose land ye dwell: but as for me and my house, we will serve the LORD.” Joshua 24:15

Sin’s unrelenting temptations often push one into a position that often cannot be escaped. Romans 1 details a terrible, downward spiral in which many find themselves. Many find out too late that one sin leads to another and that no one gets away with iniquity’s dreadful wages.

The seven-fold decline described in Romans 1 started when people did not recognize and honor God for His creation. All around them were the glorious things that only God could have made:  innumerable stars, an Earth that has all the necessities of life, life itself, living creatures that do remarkable things, man and all he can do, and flowering and food-supplying plants.

Many, as also happens today, explain away God’s marvelous handiwork with their imaginative ideas and theories of how they think those things came to be. God is not given credit for what He has done, and they certainly are not thankful for what He did.
“Because that, when they knew God, they glorified him not as God, neither were thankful; but became vain in their imaginations, and their foolish heart was darkened.” Romans 1:21

Because God’s wondrous works are explained away with concocted myths, fables, and the theory of evolution, a person can become unthankful for what God has done. Eventually, foolish hearts are darkened and hardened to hear and understand God’s truths. Many ruined lives find themselves without answers, a hopeful future, and the guidance and protection of an all-knowing, wise, and loving God. People often do not even recognize their depraved, weak conditions.

In many situations, since humanity often measures themselves by their standards or compares themselves to others, one often thinks he is intelligent and successful. However, what is considered wisdom in one’s eyes may be foolishness in God’s.
“Professing themselves to be wise, they became fools,” Rom. 1:22

However, man’s decline rarely stops there. Since one does not have God to worship, obey, and follow, one often creates his gods to worship. Sometimes it may involve worshipping a man-made idol, as in idolatrous religions. Others worship the creation rather than the Creator. The Earth is reverenced, as are animals, trees, etc.
“And changed the glory of the uncorruptible God into an image made like to corruptible man, and to birds, and fourfooted beasts, and creeping things.” Rom. 1:23

When one finds oneself at this stage of depravity, one usually justifies there is no God or that He does not need to be heeded. The sins of those rebellious often increase. One sin usually leads to others, and the rest of the Romans 1 verifies this. Verses 24 to 31 list at least 27 sins that resulted from the original sin of not glorifying God and all He has done.

The description of man’s sinful decline mentions three times that God “gave them up” and “gave them over” to their sins. Those words in those phrases mean “surrendered.”

God saw that their mind was set on “doing their own thing,” not on acknowledging Him and not obeying His commandments. God then took His guiding, protecting hands off them and let them face the consequences of their sin. They wanted their sinful lifestyle, so God “surrendered” them to the wages of their unrighteousness. How hopeless, vulnerable, and lonely it would be to have the great God give up on helping and protecting a person, yet this is a reality for many.

The progression of unrighteousness described in Romans 1 explains why sin is rampant worldwide. In their early youth, most look around and feel what they see, hear, and feel can only be there by some creative Hand.

As they get older, soon that feeling is explained away. God is forgotten, and the regression to a life devastated by sin results.

God may have every reason to take his guiding, protecting hand off lives because of their sin, but He is still a loving and forgiving God. There is always an opportunity to recognize the true, living God again, ask His forgiveness, and turn back to what was once believed. One can get back to having Him direct and help one through life, no matter how far down sin’s spiral one has plummeted. There can be hope!
“If we confess our sins, he is faithful and just to forgive us our sins, and to cleanse us from all unrighteousness.” I John 1:9

“Everybody, sooner or later, sits down to a banquet of consequences.”
—Robert Louis Stevenson

Articles in this Bible View: “To Really Stop Violence,” “Others,” “Crime,” “You May Duplicate What You Saw,” …
Theme: Why Violence? Why Sin? 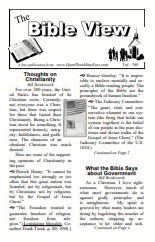 Articles in this Bible View: “Thoughts on Christianity,” “What the Bible Says about Government”
Theme: Government