In This Issue:
It’s Not What It Used to Be
We Just Can’t Win
The Ice Palace Is Gone

It’s Not What It Used to Be
Bill Brinkworth

I was save over 40 years ago. God has wrought much change in my life because of the Holy Spirit’s work and godly influences from devoted preachers, teachers, other Christians, and my study. Although I can see how He has altered my life, I can also see the changes in Christianity around me.  Many strong believers and ministries still exist and are doing great things for the Lord; unfortunately, many are not.

Some changes I have noticed are:

I am sure every previous generation of believers has also seen the erosion of Christian beliefs, morals, and biblical living during their lifetime.  Unfortunately, spiritual decay happens more often than knowing, believing, and living the way God commands.

The spiritual decline will continue at break-neck speed if individual Christians do not stop the trend. We must make a stand to live how God commands. Personal revival and determination for a God-honoring and God-obeying life can change the downward spiritual trend. It must start with us Christians! The world is constantly changing, but God’s commandments do not. We do not have to believe or do what the unsaved world does

“The carnal mind seeks to create its own God who loves everyone, puts up with all matter of evil and foolishness, and gives in to the will of evil men who cry inequality!” — Deane Edward Spencer

When I was a boy, I read of an ice palace built one winter in Petersburg. The walls, roof, floors, and furniture were all of ice and were finished with taste.  All that was in the ice palace could be found in a royal palace. Before being frozen, the ice had been colored so that all seemed formed of proper materials. Still, all was cold, useless, and transient.

Had the cold continued until now, the palace might have been still standing, but with the returning spring, it melted away. There should have been a stone with an inscription reminding people of what once stood on the spot, as there was no sign of it after the spring thaw.

Men build and plan as if their works were to endure forever, but their creations are often gone in time. After all their preparations and labors, there is usually no reminder of what they spent their money, passions, work, and priorities on.  They put their life’s priorities in temporal things rather than those that would last for eternity.  Their labors were spent on the wrong temporary things.

“Love not the world, neither the things that are in the world. If any man love the world, the love of the Father is not in him.” I John 2:15

WWW.OpenThouMineEyes.com
In This Issue:
Have You Been Seduced?
Vexed by Ungodliness
Keeping A Distance from Temptations

Have You Been Seduced?
Bill Brinkworth

Many of the problems early churches faced are very much a concern today. Those ministries had to deal with many that departed from the faith and followed “seducing spirits, and doctrines of devils” (Timothy 4:1). Being this is the “latter times” Paul spoke of, this problem is very real today.
“Now the Spirit speaketh expressly, that in the latter times some shall depart from the faith, giving heed to seducing spirits, and doctrines of devils;” I Timothy 4:1

People, then and now claim to be Christians. They may be; they may not be. At first, many make a profession of salvation and start doing something for the Lord. Too often it is not long, before they are nowhere to be found.

Why did they wander away from trying to live for the Lord? They may not have been saved and were only going through “religious” motions. If they were truly saved, they are still children of God, but they may have been “seduced” by demonic spirits.

Perhaps those spirits caused their feelings to be hurt or offended their pride. People may have faced an overwhelming temptation and succumbed to it. There are thousands of ways a person can be trapped into running in the opposite direction of obeying God.

Satan and his devils cannot get anyone unsaved. Still, they certainly can make sure one’s testimony is so destroyed that they are of little use for the cause of Christ. That is one of Satan’s goals, and unfortunately millions have succumbed to his trickery.

None of the reasons a saved person gives for not serving the Lord are legitimate. Nowhere in the Bible is there any reason one should stop living for and obeying God’s commandments. All rationales for not doing what a Christian should are not of God!

“Well, you don’t understand. So-and-so in church said mean things to me, so I’ll not go anymore.” You have been seduced, and a non-holy spirit knew where your weak point was.

“That preacher just doesn’t feed me anymore, so I’m out of there!” You have been seduced, and the wrong spirits are giggling because they “got another one.”

“I’m not reading my Bible anymore. I just don’t get anything out of it.” A deceiving spirit has seduced you.

“If I live like a Christian, everyone will laugh at me.” You have been seduced.

As Ephesians 6 reminds us, there is a spiritual war going on. Satan and his devils try their hardest to seek one “whom he may devour” (I Peter 5:8). Be wary in the raging spiritual battle and purpose to always do the will of God — no matter the temptations.

“There hath no temptation taken you but such as is common to man: but God is faithful, who will not suffer you to be tempted above that ye are able; but will with the temptation also make a way to escape, that ye may be able to bear it.” I Corinthians 10:13

When given a choice by his Uncle Abraham, Lot chose the choicest of lands to raise his cattle and family (Gen. 13:8-11).  He left Abraham (named Abram at the time) the less appealing land and kept the “best” real estate for himself.

Lot’s selfish pick may have appeared to be the best choice. There was, however, one important matter the nephew did not consider when picking where he would live.  He did not contemplate what his soon-to-be neighbors would be like.  The places he lived near were the twin cities: Sodom and Gomorrah.  Those cities were known for their rampant sin, particularly homosexuality.  It was there that the righteous man, Lot, chose to live.

It was not long before he was involved in the city’s government (Gen. 19:1, 9).  He was not only living among wickedness, but he was involved in the choices made to help the community be managed. Shortly, his constant exposure to godlessness and sin affected Lot. The Bible says that he was “… vexed with the filthy conversation of the wicked… in seeing and hearing, vexed his righteous soul from day to day with their unlawful deeds;” (II Peter 2:7-8). The part of Lot that wanted to live and please the Lord was “irritated, harassed, teased, and disturbed” by the lifestyle he allowed himself and his family to be exposed.

As a Christian, we usually cannot live on top of a mountain, away from the world and all sin.  Most of the time, we have to live around iniquity. It is seen in the workplace, heard on the television, and we can be exposed to its consequences and involvement wherever we go.

However, if we are not wary of it and do all we can to limit our exposure to iniquity, we too will be “vexed” by sin.  It will wear on us, and if we are not careful, evilness will be commonplace to us.  Seeing or hearing sin will not bother us like it did previously. The spiritual part of us will be desensitized to sin’s evilness.  If we are not careful, we will be involved in it and think it is normal because “everyone is doing it.”

Despite what the unsaved world is doing, sin is and always will be wrong.  The only protection from being desensitized or involved in it is to do one’s best to avoid it.  If you are vexed (troubled or bothered) by filthy language on television, there may be some channels you should never watch again, or you may have to stop watching the “hellevision” altogether.

Filthy words creeping into your language? Maybe there are some influencing foul-mouths you should no longer listen to or associate. Seeing things your eyes should not be seeing on the Internet? Limit where you browse, or maybe you will have to stay off the Internet. Dirty images you have already viewed plaguing your thought-life? Avoid further looks and recite Scripture verses, particularly about what you are thinking.  It is difficult to have the clean Word of God and filthiness in your thought-life at the same time. The sinful thoughts will flee!

The key to keeping a holy, unsoiled life and testimony for the Lord is to separate (II Cor. 6:17) from the world’s ungodliness.  It is possible to remain undefiled in this ever-increasing, sinful world. If we purpose in our hearts to not be defiled by ungodliness in this world, the Lord will do His part to help us.  He will give the believer “a way to escape” sin’s vexing grasp if the believer desires it!

“If you can get along with the world, then you are out of step with God!” — Dr. Harold Sightler

“I will behave myself wisely in a perfect way. O when wilt thou come unto me? I will walk within my house with a perfect heart.” Psalm 101:2

Successful people often reveal how they got so many achievements and victories.  David did that in Psalm 101.  He accomplished what he did, not only because of his wealth and powerful position.  David attained so much because he behaved himself “wisely in a perfect way” (Psalm 101:2).

In this Scripture, “perfect” was not referring to sinlessness.  “Perfect” in this context means “moral, upright, sincere, undefiled.” Although he fell spiritually several times, the leader of Israel tried his best to live the way that was pleasing to the Lord.

David revealed several ways he kept from spiritually falling even more than he did.

Although this Psalm was written over 3,000 years ago, every behavior that David did to protect himself from falling into sin would help people today.  Temptations surround every single one of us. We will also be inclined to sin if we do not separate ourselves from those destroyers of our testimony and joy.  Avoid wrong influences, or you too will succumb to sinful behaviors and evil temptations.

“The reason the world is not seeing Jesus is that Christian people are not filled with Jesus.  They are satisfied with attending meetings weekly, reading the Bible occasionally, and praying sometimes.  It is an awful thing to see people who profess to be Christian who are lifeless, powerless, and in a place where their lives are so parallel to unbelievers lives it is difficult to tell which place they are in, whether in the flesh or the Spirit.” — Smith Wigglesworth 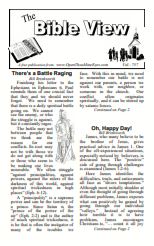 Articles in this Bible View: “There’s a Battle Raging,” “Oh, Happy Day,” “Avoid Temptation,” “Too Much Bridle,” …
Theme: Temptation for the Christian