In This Issue:
Convenient Christianity
Get It Yourself

A free, printable pamphlet entitled “What Does God Say about Drinking Alcohol” is available at https://openthoumineeyes.com/lessons/Drinking_Pamplet.pdf.   It would be appreciated to hear who plans to use it (brinworth@frontier.com), so I can decide if I should offer more of these short pamphlets for ministry use.

For over ten years, I have been e-mailing 2,000+ people a daily devotion I have written.  About a year ago, I suddenly lost the ability to reach over 165+ countries with sound biblical doctrine because of a large technology company’s decision.

At first, I was furious that the company caused that part of my ministry to halt.  I, of course,  prayed.  Soon, I came to an understanding that perhaps it was not a bad thing.  I could have fought it and gone to another company, but I realized in these times, it could easily happen again.

I realized that seeking the truths from God’s Word should not always be “easy,” as perhaps my e-mails made it for some.  If one pursues what He has preserved for them, it would matter more to that person and build a stronger Christian if one made an effort to get spiritually fed himself.

Christianity has been made readily available to many, but what caliber of Christian has it produced? When I e-mailed the devotion to people, how many read it, and how many lives did it change?

Because Christianity has been made “easy,” many no longer go to church because they can watch it on television. Others do not concentrate and read the Bible but listen to a Christian broadcast while doing something else.  What so many call a “devotion” is a reference to a Bible verse they are supposed to look up and a short, cute story.  That spiritual snack will do little in building a stronger Christian.

Very few feed themselves with the only things that will open their eyes and change their lives.  Those efforts should be to read and study God’s Word and talk to its Originator in prayer.

One gets out of what one puts into most things in life.  This applies to getting an education, career, and most areas.  Having a close walk with the Lord is also no different.  God is watching the efforts we make to hear His truths, to obey Him, and He reads our heart’s desires to know if we want to have a close relationship with Him.

Christianity today has, for many, been made too convenient and has produced fewer strong, faithful, obedient believers.  Many will not pay the cost to witness to their neighbors or those they encounter because it may cost them embarrassment.  Their lack of desiring to be what God wants them to be, not attempting to seek what God has for them, and not separating from what God warns them to avoid will never produce a strong Christian. The only way any Christian grows is if they pay the cost of seeking God’s truths and obeying them.  That price tag includes desire, effort, and sacrifice, no matter what it takes to be close to God and be used by Him.

In the past, I have heard of one man who walked through the African jungle over 1,000 miles through swamps, dangers, and treacherous jungles to listen to a man read from the Word of God. The journey took several months.  It was important to him, so he was willing to pay the price to know God and what He desired of the man.

In John Foxe’s Book of Martyrs, one will read of those who sacrificed their possessions, relationships, and even their lives rather than deny Christ or stop reading His Word.  God’s truths were important to them. They did whatever it took to hear His Word and obey His commandments.

Today, many Christians in Islamic countries are being slaughtered and tortured, but the believers would not recant their faith.  They were willing to pay the price to be close to God with their life!  No matter what happened to them, they made an effort because it was of great value to them.

Instead of making reading God’s Word easy and convenient, if people want to learn what God has for them, I urge them to get into their car and drive to every church service they can.  If they want to know God’s will and way for them, they need to pay the cost of reading His Word for themselves and laboring over sincere prayers.

My devotions are still available on www.DevotionsFromTheBible.com and www.OpenThouMineEyes.com to provide supplemental teaching of God’s Word.  However, I urge you to be willing to pay the cost (my material is always free financially) and make an consistant effort to delve in and study God’s Word yourself.

“The best truths are gotten by digging deep for them.”   — D. L. Moody

Get It Yourself
Bill Brinkworth

Something has more value when you get it yourself. All can attest to feeling pride when hard, earned money is used to purchase something. “I got that myself because I worked for it” is the warm feeling one usually gets. The purchased object has much personal meaning and value because it was earned.

Pride and value are not usually gained as much when something is given to a person. Proof of this is often seen in government housing. Because of their economic situation, the people were allowed to live in accommodations provided for them at unusually low rates or free. Because it was given and not earned, it is usually not maintained. It is not uncommon that government housing areas are often the worst-looking areas in the community for that reason.

Cafeteria workers in public schools often attest to their disgust at the waste they see of uneaten, “free” food. Someone else’s tax money paid for the children to get those breakfasts or lunches. Because there was no pride in laboring for it or knowing mom and dad worked to pay for the meals, the children took a couple of bites, or none at all, and tossed it away.

When cheating on a test, a student may pass the exam, but the knowledge and self-respect of learning the material were not obtained. Study habits are not developed because the student found an easy way to pass without getting the knowledge for himself.

This “get-it-easily” attitude can also be applied to the things of God. When a person sits in the pew and absorbs what is preached from the pulpit, what is gained will not be as important to him as if he mined the Word of God himself. It may be why many Christians know so little about the Bible. Also, it may be why God has preserved II Timothy 2:15 which says, “Study to shew thyself approved unto God, a workman that needeth not to be ashamed, rightly dividing the word of truth.”

When one becomes a “workman” and digs into the scriptures to get the truth for himself, much is gained. First, it shows himself and the Lord that knowing the truth is important enough to spend his time to obtain what God has said. There will be pride in the wisdom gained, and one will be closer to God.  The time spent will help etch scriptures into his mind, help memorize it, and allow him to see how other verses teach similar truths. What is learned will not be forgotten as easily as if they were told to him from the pulpit.

After delving into the scriptures, one would “rightly” divide the truth from fiction. They would learn what God said rather than rely on hearsay, someone else’s interpretation, opinion, or non-biblical traditions. Many might even see what their religion or cult teaches is blasphemous.  Certainly, they would learn from God’s Word what they must do to please Him.

Getting biblical knowledge requires too much effort for many.  They never read and study the Bible for themselves. Too many would rather trust a pastor to tell them what the Bible says. The attitude quite often is “He spent years in seminary studying it,” or “I cannot understand the Bible, so I need someone to tell me what it means.”

You would be very surprised at what some of the professional religionists believe or say about the Scripture. I have talked to many only to discover that those leaders have little understanding of the Bible or believe doctrines that are not taught in God’s Word. Those sitting in the pews will not know the difference because they never got the knowledge for themselves.

If the knowledge is not gotten for oneself the hard way by reading and studying, one’s spiritual life usually suffers.  One will not have the proper spiritual guidance and may go in a direction God would not have him go. Discerning right and sin will be skewed by not having the spiritual measuring tool, the Bible, to gauge decisions.

God is so good to allow us to have His Word (Isaiah 40:8). It is the only way one can know His true mind. Sadly, personal reading of the Holy Scriptures is lacking. Too many who profess to be children of God have never completely read the Word of God for themselves.

Although my main ministry is writing devotions and Bible studies, they are intended to be additional study material or a jumping-off point for those seeking His truths. I encourage you to read your Bible and obtain its truth for yourself. It will mean more to you, and the rewards of knowing His truth will change your life.

“The Bible was not given so much for our information, but for our transformation.”  – Author Unknown 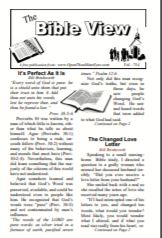 Articles in this Bible View: “It’s Perfect As It Is,” “The Changed Love Letter,” “Why Our Bible Is Changed”
Theme: The Corruption of God’s Word