In This Issue:
Keep from Backsliding — Again!
Hymn Writer Loses Joy of Salvation
Go to the Devil

Printable versions (bulletin insert, large print, and e-mail versions) of this Bible View and many others can be found at https://openthoumineeyes.com/newsletters.html.

To reach more with sound, biblical doctrine, there are three FREE forms of the Bible View weekly newsletter.  There is the ministry version suitable for church bulleting inserts or handouts, the e-mail version, and LARGE PRINT editions.  They are available at: http://www.openthoumineeyes.com/newsletters.html.

If there is a point when a Christian says, “I used to do” some spiritual feat that they are not doing any longer, chances are they are backslidden.  They may be “slidden” away from the spiritual height they once were.

Some of the common “I used to do’s” include: I used to attend church, read my Bible, have a prayer life, go on visitation, teach a Sunday school class, fast, have a closer relationship with the Lord than I do now, and on the list can go.  If they are honest, every Christian will omit that they have been in a backslidden condition more than once.

Sometimes, not only can an individual be farther away from God than they were in the past, but also a nation or people can.   Such was the case with the people of Israel, as can be read in the book of Nehemiah.

The main center of Israel’s worship, Jerusalem, was deserted and in disarray in Nehemiah’s day.  No longer did its temple host sacrifices and the worshipping of God.  The place of worship was destroyed, as were the city’s walls and gates.  Streets were cluttered with debris.  No longer was the city used for worship because the people were backslidden away from their Creator.

God raised up a man, Nehemiah, who had the burden and fortitude to rebuild the center for worship.  It was difficult rebuilding the city.  Individuals opposed him.  The government tried to stop him.

When the enemies increased, the rebuilding became more difficult.  There were times they built with one arm and wielded a weapon in the other to protect themselves.  However, the task got completed.  The place for worship was repaired and ready to be used.

As in any “backslidden” condition, it is hard to return to where one once was.  Reconstruction can be more difficult than the original “construction” in an individual’s life.  When people decide to return to where they once were with God, it is difficult to do, as Nehemiah realized.  The only way out of the backslidden condition is to do hard work, as did Nehemiah and the other Israelites.

After one has returned to the level he had once been, there is still a danger of backsliding again.  Nehemiah knew this, and after the city was rebuilt, he took several steps to make it difficult for the same disarray to happen to his people’s lives and worship. Those measures included:

To return from a backslidden condition, we must make sure we worship properly in a good, Bible-obeying church.  Many get far from God, and when they want to get closer to Him, they pick the same worship (or lack thereof) that may have helped them get into the far-from God condition initially.  The spiritually wrong leaders or way of worship may lead them in the same wrong direction.

When attempting to return to the Lord, make sure worship or the place you attend, has godly guidance.  Many have wanted to turn back to God, but the liberal, watered-down preaching they heard never included enough of the Word of God to guide them away from their backslidden condition.

No one can have two masters.  We cannot serve ourselves and God.  It must only be God that we serve, or we can end up far from Him.  The same selfish decisions that got us in the spiritual condition before will get us there again if we do not make the right choices!
“No man can serve two masters: for either he will hate the one, and love the other; or else he will hold to the one, and despise the other. Ye cannot serve God and mammon.”  Matthew 6:24

The source God has left behind for us to know His will and way is in the preserved King James Bible (for English-speaking people).  It has been kept so we would know what God desires of us.

The Word of God cannot be replaced by opinions, Christian radio or television, or other media.  Although those sources can be a spiritually positive influence, we must read God’s Word ourselves.  Without doing so, we will not know God’s will and way. Too many have gotten far from God because they trusted another to feed them spiritually.  Because the spiritual “food” was tainted and not feeding one spiritually, they were not strong enough to make the right decisions.

Ex-backsliders must know what they did to get themselves in the far-from-God position.  It will seldom be “he made me do it”, or “it wasn’t my fault”.  Usually, it is personal decisions that got us into a not-obeying-God-state.  We could have always said “no” to temptations.

Some paid a tremendous price to say “no” to disobedience.  They may have lost their job, friends, social standing, or even their lives, but they chose to obey.  To prevent backsliding, one must take responsibility for what was done wrong against God and avoid it in the future.  Seldom, if ever, are we “victims” in not obeying God.

As a Christian, we can follow and obey God every single day of our lives, but we will always have a weakness that we will have to battle the entirety of our lives.  That weakness is our sinful nature.  We may be forgiven, but we can quickly follow that nature and not God.

When we obey God, we please Him.  Disobedience will cause us to backslide from a close fellowship with God.  There is always hope for a return to a close relationship with Him.  One should leave the self-life and return to the spirit-led life.  Do all you can to avoid backsliding again!

Christian, are you backslidden?  Come on home!

Robert Robinson, author of the hymn “Come, Thou Fount of Every Blessing,” lost the happy communion with the Saviour he had once enjoyed. In his declining years, he wandered into the byways of sin.  As a result, Mr. Robinson became deeply troubled in his spirit.  Hoping to relieve his mind, he traveled.

In his journeys, he talked with a young woman about spiritual matters.  She asked him what he thought of a hymn she had just been reading.  To his astonishment, it was none other than his own composition.  He tried to evade her questions, but she continued to press him for a response.

Suddenly, he wept.   With tears streaming down his cheeks, he said, “I am the man who wrote that hymn many years ago.  I’d give anything to experience again the joy I knew then.”

Although greatly surprised, she reassured him that the “streams of mercy” mentioned in his song still flowed.  Mr. Robinson was deeply touched.  Turning his “wandering heart” to the Lord, he was restored to full fellowship.

(1) Come, Thou Fount of ev’ry blessing, Tune my heart to sing Thy grace; Streams of mercy, never ceasing, Call for songs of loudest praise.  Teach me some melodious sonnet, Sung by flaming tongues above; Praise the mount — I’m fixed upon it — Mount of Thy redeeming love.

(3) O to grace how great a debtor, Daily I’m constrained to be!  Let Thy goodness, like a fetter, Bind my wandering heart to Thee: Prone to wander, Lord, I feel it, Prone to leave the God I love; Here’s my heart, O take and seal it; Seal it for Thy courts above.

“Inbred corruption is the worst corruption.  ‘Lord,’ said Augustine, ‘deliver me from my worst enemy, that wicked man — myself.’”— Spurgeon

Go to the Devil
Author Unknown

Before the turn of the last century, an ardent and dedicated Christian wrote a tract entitled “Come to Jesus.” It became famous and influenced many for Christ.

Later, he became engaged in a theological dispute.  In reply to a publication against his tract by an opponent, he wrote an article bristling with sharp and cutting words.  Looking for a title, he asked his friend.  His friend wisely suggested: “Call it ‘Go to the Devil’ by the Author of ‘Come to Jesus.’”  The writer destroyed the article.

“When a man, who professes to be converted, says that he goes into the world and sin for pleasure, it is as if an angel went to Hell for enjoyment.”
— Spurgeon 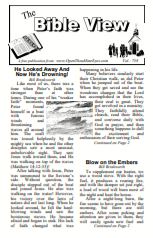 Articles in this Bible View: “He Looked Away and Now He’s Drowning!” “Blow on the Embers,” “Lost Fellowship,” …
Theme: Spiritual Weakness

Articles in this Bible View: “The House,” “Hymn Writer Loses Joy of Salvation,” “When God Gave Them Up”
Theme: Backsliding